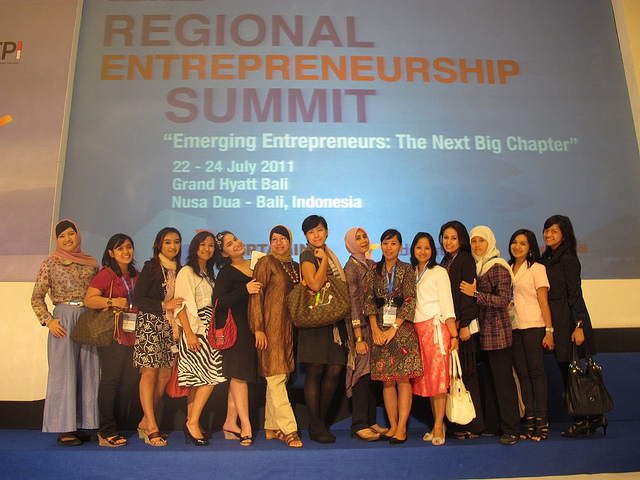 I want to share you several points that caught my attention in RES event.

I was very fascinated with Ibu Mari Elka Pangestu keynote speech. There are a lot points that make me nodded. And I must say to Anne, the girl from NGO beside me, “She can read my mind.” :))

Ibu Mari said, “Real role of entrepreneurs stretches beyond business, because entrepreneurs great assets are their idea, creativity and innovation. Entrepreneurs tackle group problems of poverty and inequity and their innovations enable us to have a better life as well as to lead from development, so it is also about reducing poverty.”

She also mentioned the terms of productive poor and it struck me. The 70% productive poor are women. They are poor but that it doesn’t mean that they are not productive. They can be productive if you give them training to the point that they can become entrepreneurs. It’s a very eye opening statement.

Eric Schmidt from Google said that Indonesia has a loud democracy, a flourishing society, and an integrated media. Thank you Mr. Schmidt. Indonesian freedom of expression is something we should be proud of. BBC said Indonesia is the best place in the world to start a business, and I think it’s a sign for all of us to maximized our potential.

The lessons I learned on the second day panel discussion with social entrepreneurs like Tri Mumpuni: find out what’s the problem in society and offer solutions.

Tri Mumpuni saw problems on how Indonesian people in rural area are less developed than the urban. She analyzed that it could be because the lack of access of technology, because there are no electricity in those areas.

She & her husband then starting to find solution, helping villages to create and manage their own electricity, using it for their village development to the point where PLN from the government buy the electricity from them and the fund can be used to build schools and access to education. Amazing!

Notes from the handsome and charming Pak Gita Wirjawan (ehm), chairman of Indonesia’s Investment Coordinating Board (BKPM), he said the key of success are the confident to take risk and not afraid to make mistakes (as long as you learn from it and don’t do the same mistake again), education (never stop learning), networking (don’t be timid) and luck that you get from opportunities meet preparation.

The most interesting in day 3 of the conference was the break out session about womenpreneurs. Of course, the nature of women is we love to talk. And our session lasts longer than any other breakout sessions :))

Quoting secretary Clinton, “And we particularly want to encourage women entrepreneurs, because, as the minister said, no economy can thrive if it leaves half the population behind. In fact, a recent United Nations study estimated that in the Asia Pacific region, the untapped potential of women has cost the region more than $40 billion in lost GDP over the last decade. So we’re supporting new micro finance projects, building peer networks, and offering mentorships with American businesswomen.”

I totally in sync with Secretary Clinton and Ibu Mari Elka. I also strongly believe in promoting technology as catalyst for women development, either in personal area or in business.

From my conversation with Mbak @bril , editor-in-chief Sekar magazine, Indonesian young women already familiar with social media (we’re #2 Facebook Users after USA), but they have no idea on how to use technology more than chat or status update. For the older women, the problem is different. They’re afraid and don’t want to complicate their life with technology hehe. That’s the challenges.

From the breakout session I’ve learned that, women entrepreneurs face the same problem all over the world, one of them is the fear of failure (self confidence in building business). Aside from training & education, Indonesian women need more mentors & role models for womenpreneurs that they can look up to. So, women(tech)preneurs, if you are there, show up and be an inspiration for others.

“The big questions finally is how can we have a program and an ecosystem for this entrepreneurs that makes the good idea to help them turn these ideas into reality and help them to nurture it for it to become sustainable,” said bu Mari Elka.

As one of initiators of @StartupLokal , co-founder of @projectEden   and also a woman, I feel the urge to do something. I immediately request a quota in @projectEden incubation space special for women founders (which already approved by my partners, thank you very much). And after Eid, @startuplokal plan to create a meetup with topic “Women Founders” where we will invite some women tech startup founders in Indonesia and we’re going to throw a pitching session special for women who have great ideas, hopefully from there they can find partners (as there are many great technical people in #StartupLokal community) or of course if it’s fit with @projectEden vision, some of them can also join the incubation

Meanwhile my friendship with the girls from Womenpreneur Indonesia community still going strong, just had a followup lunch with some of them, and they plan to invite me to speak at some of their events. Hope I can help spread the sparks!

Indonesia now only have 0.38% entrepreneurs of our population while Malaysia has 3% and Singapore has 7%. We need the minimum 2% of population to be entrepreneurs to gain nation’s prosperity. As entrepreneurs create jobs and change life one person at a time.

We still have plenty of room to grow, more than 50% of population are young people under 29 years old, and we have the biggest market out of 650 million people in South East Asia. All we need to do is starting. Big or small business, the most important thing is to start moving. Because as you move, no matter how small step you take, you’ll be ‘lucky’ – Create Your Own Luck!

I know not all of us can be billionaire, but as Tarun Khanna from Harvard Business School said, “It is better to create billions of entrepreneurs.” I couldn’t agree more!