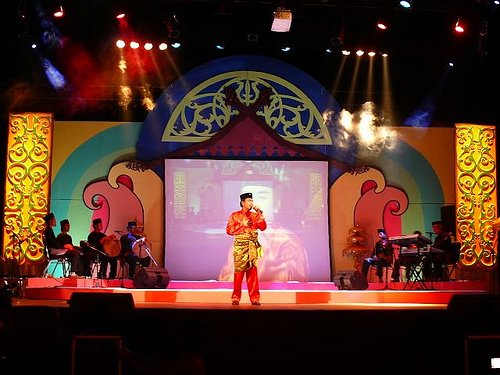 It’s Zapin Night at Graha Bhakti Budaya, Taman Ismail Marzuki, Jakarta. The event held by Bengkalis Authority and Yayasan Panggung Melayu. The stage was colorful and ready to have performances from Zapin singers dan dances. But, what is Zapin exactly?

I’m Indonesian and I thought Zapin was Serampang 12 from Aceh. Hehe. Totally WRONG. Zapin is a package of traditional music, dance and singing, of Bengkalis. It has a great influence of Middle East style of dance and also Melayu style of singing. The event was all about Zapin Album launching and the announcement of Zapin Singing Festival’s Winners. It began with various speech from the chief, Asrizal Nur, Regent of Bengkalis, H. Syamsurizal, and many more. They’re hoping that Zapin will be widely known as Bengkalis treasure and could contribute more as one of Indonesian rich culture.

The night was also the BIG night for Zapin Idol finalist (hehe I prefer to called it that way, sounds more modern :p). The judges decided that the first winner of Zapin Idol was Lansyah Ruzh. He was also performing that night, singing a Zapin song beautifully. He deserves to be a winner 🙂 Then the dancers came out! It was the performance that I’ve been expecting since minute one. Rika, Chandra’s wife, was one of the Zapin dancers and I can’t wait to see her perform. But minutes later I realized that I couldn’t find her around the dancers. They’re all looked the same with the hijab 😀 But I’m really happy to see them, the rythm was perfect, the move was also dynamic, I loved it! Congrats on the beautiful dance, Rika! 🙂

I hope this event was not the last cultural events that I see this year. I fully support Visit Indonesia Year, 2008. And I hope government would give more attentions to cultural events and give us the information of fix schedules about it.

Check out more of Zapin Festival Pictures on Flickr.

Watch the Zapin Dance on Google Video below

All the bugs in Bali have been biting me. What am I doing wrong?