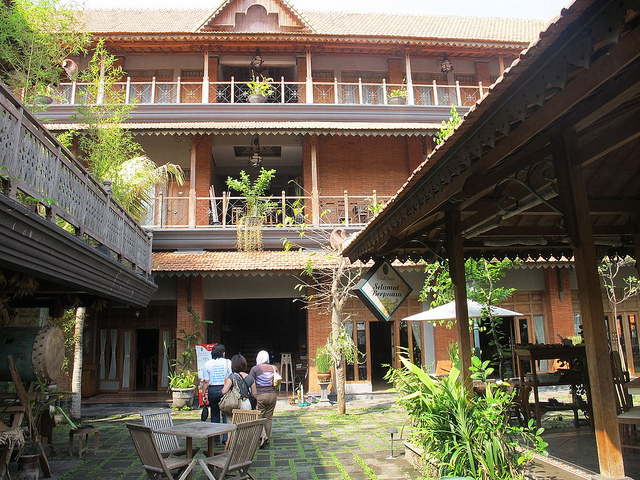 Solo is our first city for ON | OFF Chat 2011 supported by @akbersolo  & @usembassyjkt . ON | OFF Chat is a pre-event part of ON | OFF 2011 that will go to 10 cities all around Indonesia to do workshops & promote the use of social media to empower positive activities. We would talk about different topics in each cities. In Solo, the topic was about education, how with online tools we can make offline impact. With inspirations from the speakers, Mas Agus Sampurno @gurukreatif  that has been using his blog to promote creative teaching, and Mbak Ainun Chomsun @pasarsapi  founder of Akademi Berbagi, a movement started on twitter to provide free useful classes for everyone, we really hope there are new movements that can start its spark in Solo. After the seminar, the participants form 10 groups with 5 people each, to discuss their own movement. They need to identify the problems they face (in education), how to solve the problem with social media and name of the project they want to make. They have 45 minutes, but some groups spent 30 minutes only to identify problems, there are too many problems they said. But I suggest them to pick priority of problem that can be solve faster and its impact must be bigger than others. They do 5 minutes pitch of the project on stage, with me (as the ChairWoman of ON | OFF 2011), Mbak Ai & Mas Agus as the advisor. They’ve been putting their best effort in creating the project, I’m so happy! They could identify problems like educational material that should be in-sync with the local situation, the cross-community platform to be able to access knowledge from each community, education access to remote area, etc.

But what we like the most is the idea about SMK business project, where they want to give opportunities for brilliant-ready-to-work SMK students, it could be a form of finding investors and teach them how to make a good business plan, access to market, etc. They will use social media as tool to promote the movement. The winner get coaching session with me, Mbak Ainun & Mas Agus for a month to launch their movement. And of course I hope all 9 ideas would also be executed! At night, we have a cross-community gathering, online and offline communities collide in a room. 15 communities coming. There are train, bus, bike, reptile lover community (they bring snakes!) and many more. We have a little talkshow with me, mas Sunanto & mas Imam from @akbersolo . Then we have the communities introduced themselves. We had a lot of laugh, understanding of what other communities are doing and ideas to collaborate in each and every way. Really a great online offline – ON | OFF – moment 😀 And the special mystery guest of the night was finally coming: Mr. Jokowi, the Mayor of Solo. I sat beside him (yes, he sat on the floor with us!) and tell him what’s ON | OFF Chat 2011 is all about. He’s been nodding and said while staring at the community on the stage, “They should keep doing the creative thing, about budget and all that stuff, it’s my job to provide!” He then announce that he’s providing a creative space for community where they can hang out and use the facility. Also if there’s a potential, he will recruit the community in his own version of incubation. Oh wow. Talk about direct support from government! He’s so amazing. And have changed Solo into a bettery city. In Solo, everything has its own philosophy. And that makes me fall in love with the city. There’s something that make me compare the city with Ubud. The culture, the serenity, the wisdom.

Thank you Solo and our new friends from @AkberSolo : @imamsubchan @azisbakhtiar  @BudiPrajitno  @SadrahDeep  for your hospitality. We got a lot of inspirations and having a fantastic time there. We will missed the late night wedangan 😀 Hope to see you in Jakarta for ON | OFF 2011! Also read these article about ON | OFF Chat 2011: Solo